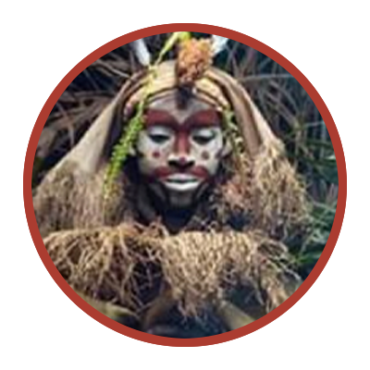 His purpose? To continue a family lineage—a bloodline coursing with original Earth wisdom and practice—and become tenth in a line of Gabonese Bwiti Shamans. He was to continue the work of the Pygmies and spread the healing message of Iboga. 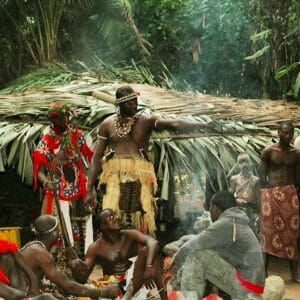 “While pregnant with me, my mother was taking Iboga, so I had a taste of the medicine even while in her belly,” Moughenda says.

Moughenda’s shamanic lineage originates on his mother’s side of the family, with training led by his grandfather.

“I worked with Grandpa even before my first Iboga initiation, and continued training with him after I graduated,” he says.“He lived 10 years after I became a shaman.”

At the beginning of his path, at just eight years old, Moughenda was given his first large dose of Iboga—an amount large enough to make him pass out. At age 12, he had his first spiritual journey during an intense initiation with the medicine.

But in his journey toward becoming a Bwiti Shaman, the work had just begun.

“There are really four Full Initiations(with iboga) one must be pushed through in order to become a real Missoko Bwiti Shaman,” says Moughenda.“Anda fifth called the Bwiti of Maboundi, which is the Bwiti of Women.”

In order to be accepted into his role of shaman, the shaman must complete traditional initiations, such as:

While training, Moughenda completed one initiation every two years.

While many sects of Bwiti exist throughout Central-Western Africa, the Missoko—the group of Bwiti to which Moughenda belongs—are the Bwiti who instituted all healing therapies used and found in the Bwiti tradition.

They are ultimate healers, pulling the roots of their medicines from deep within the jungle. 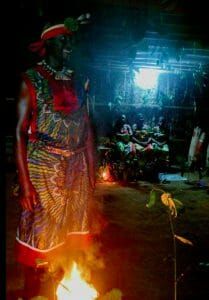 Once his initiations were complete, Moughenda took his role as village shaman. But soon, his plans of remaining in Gabon and working with his people changed.

“I never thought I would be leaving my own country to go to the West until Iboga came to me one day, and told me that’s what I needed to do,” he says.“The medicine told me to travel to the Western world—a world that deeply needed healing—and spread the teaching and knowledge of Iboga.”

Following this truth, Moughenda left his home and spent the next 14 years in the West, treating people seeking truth and healing in the traditional Bwiti way.

Now, back in his home country of Gabon, Moughenda is dedicated to leading traditional ceremonies and Full Initiations for those called to the source of Iboga. No Full Initiation into the Bwiti can happen outside of Africa.

Yet, Moughenda’s mission in the West is far from complete.

“I will still go back to the Western world soon because my purpose there is not over yet,” he says.

But while he remains on the fertile soil of Africa’s Motherland, his presence and focus is on his work as a traditional Shaman.

“To me, living as a true shaman is the best thing that ever happened to me. I love and enjoy working with people, helping them heal deep wounds, find their true selves, discover happiness and their true spiritual paths,” he says.“Meeting people from all walks of life, sharing the Bwiti tradition’s teachings and knowledge, the medicine of Iboga and its healing, has been a huge blessing to me. I thank God every day for being born into a true shamanic lineage.”

The opportunity to connect to Iboga in its home country, to dig your feet into the Earth in which its roots grow and spread, to be healed at the hands of traditional Bwiti and Pygmy shamans, is truly to embody the spirit of this plant. The spirit of life itself.

Without the ongoing training, support, and guidance of Moughenda, we would not be able to do what we do.  He is our Teacher, Mentor, a spiritual father, and chief consultant in all of our work.

Moughenda is a 10th generation Missoko Bwiti Shaman.  He started ingesting Iboga while in utero during his mother’s pregnancy and started apprenticing as a shaman under his Maternal Grandfather while he was still a child.  After decades of intensive training, apprenticeship, and going through many initiations, Moughenda took the role of lead shaman in his community. 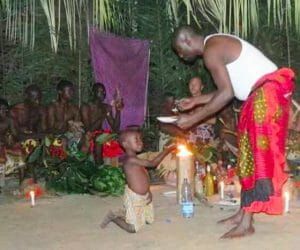 Moughenda is head Shaman and Spiritual Director of his community, part of the Missoko Bwiti tribe.  Not only does he lead healing, and medicine work, including work with Iboga, he also conducts wedding rites, funeral rites, and conflict resolution/mediation in the community, among other responsibilities.

Moughenda is the first Bwiti shaman to travel to West(after receiving guidance from the medicine to do so),  and study the Western culture and way of life, and learn the English language.  Moughenda spent a total of 14 years traveling, teaching, and facilitating medicine work in the United States, Central America, and Canada (where he connected with Michael).It was during this time that Moughenda specially designed a system of working with Iboga for people outside of the African continent.   This system integrates Bwiti shamanic healing tools and methods, incorporated into a format that addresses the unique needs of Western psychology.  It is the format used by most Iboga providers outside of Africa.Moughenda is also the first Bwiti shaman to open up to teaching students to be providers of iboga, from outside of the Bwiti and Pygmy cultures and from outside of the African continent.  As knowledge of Iboga spreads around the world, Moughenda also intends that the Bwiti teachings spread alongside it.Moughenda is now grounded in his community in Gabon, traveling occasionally for his work internationally.  His Village opens their door to host international guests and students each summer for psycho-spiritual retreats, Rites of Passage, Initiations, and Iboga Provider training.

Have questions? Want to be updated on future events?