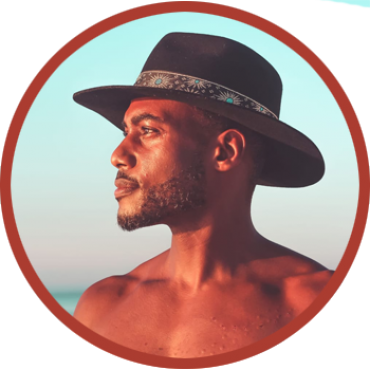 An international seeker of truth, love, and balance in a world of duality. Comes from a place of heart centered wisdom and embodiment of love. Having experienced deep transformational journeys with facing death through cancer and loss of a parent and marriage he realized life was asking him to fully be lived or to die. So he chose life to the fullest. This led him on a self discovery journey to the heart of Mother Earth and a rites of passage initiation with Some of Mother Earth’s most sacred places..such as Kaua’i and the Hawaiian islands, Thailand, Bali Temples in South East Asia and Africa. Ezriyah credits sacred plant medicines, notably a combination.

He was guided to Gabon to partake in a deep immersion Iboga initiation to help heal his cancer. Upon coming back to the United States all of his cancer markers and labs returned to normal and he was in peak health. The doctors were marveled and called him “A new human being’. Ez knew this was a result of sacred plants and has his ancestors to thank for guiding him to the answers, deep in the jungle of Gabon.

Ez has been learning to fully rise into a man of honor, love and integrity. His passion and area of focus is teaching men how to come into balance with the heart and feel their emotions to be a conscious co- creator in life. Through this he has been inspired to share his self discoveries and wisdom he’s learned on this path to help men be more in touch with themselves and life purpose.

Have questions? Want to be updated on future events?